Please note that assistive links (commonly known as "skip to links") are used throughout this site. These links are not well-supported by some mobile devices. If you are encountering difficulty using these links, please navigate around these links, or access the site on a desktop browser.
Skip to the primary content of this page Skip to the footer of this page
Url for Schema microdata purposes only
Skip to the end of the Expertise Menu 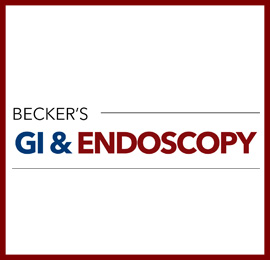 Here are the five most-read stories on gastroenterology and endoscopy Becker’s ASC Review has reported on in 2021:

1. In April, TriHealth, a Cincinnati-based health system, sued to enforce a noncompete clause for 18 gastroenterologists who planned to leave the system in June, according to a Cincinnati Business Courier report. Here are five details to know.

3. In January, a 73-year-old gastroenterologist was sentenced to three years of probation, 1,000 hours of community service and a $2.9 million restitution payment for his involvement in a decadeslong insurance fraud scheme.

4. In May, Gastro Health was sold to private equity company Omers. Miami-based Gastro Health previously was owned by Audax Private Equity, which acquired the company in 2016. While precise financial details of the transaction were not disclosed, PE Hub released a report in February that speculated Gastro Health to be worth $65 million in EBITDA.

5. In February, before the sale of Gastro Health was finalized, Becker’s ASC Review spoke with Eric Major, director at Provident Healthcare Partners, and Praveen Suthrum, president of NextServices, a healthcare management company, about what they believed a Gastro Health deal could look like and what the ramifications would mean to the industry.

Read the full interview with Eric here: Who’s interested in buying Gastro Health, at what valuation & what it could all mean

We use cookies to enhance your experience. By clicking "accept" or continuing to use this site, you are consenting to our use of cookies.

A "cookie" is a small digital file that is created by a website and then stored by a user's browser. We use these cookies to help improve our site, including improvements to both content and ease of use. We do not use cookies to store any personal identifying information about you, and you can remove cookies from your browser at any time.